By Graeme Riley and Daniel Rhodes.

The return leg at Anfield (Thursday, kick off 20.05 UK time, ITV1) sees us trying to overturn that 0-2 defeat in St.Petersburg to progress and play Dnipro or Basel (Basel won their home leg 2-0 also). Zenit have returned 1,000 unsold tickets for the Anfield Road Lower, which have gone on general sale.

The rest of this preview is taken from the original for the first leg, with Daniel’s additions to come.

Zenit are the largest football club in St Petersburg, formerly Leningrad, Russia’s second city, and they have a long and largely successful history. They have in recent seasons been involved in controversy, particularly around the behaviour of a section of their support which has been vocally anti-gay and against anyone who is not white representing the club. 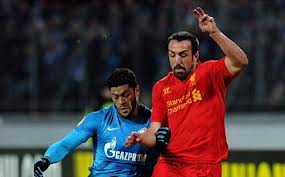 The club was formed by a merger in 1939 of two earlier clubs, Murzinka (founded in 1914) who had subsequently changed their name during the 1917 Revolution to Bolshevik and the Leningrad Steel Works (founded in 1925 and known as Stalinets, a play on words having its base in Stalin and the Russian for steel). Bolshevik had re-registered their name as FC Zenit in 1936, the name being taken from the arms industry’s voluntary sports society, this being the first reference to the modern day name.
The club made its debut in the top flight of the Soviet League in 1940, finishing tenth of 12 clubs and avoiding relegation by just a couple of points. The league took a four year break for the war, during which the club won its first honour, the Soviet Cup in 1944.  On resumption of league football they were generally to be found in mid-table, only once being outside the top ten but never higher than fourth until the league was restructured into regional groups in the early 1960s.

It looked as though this routine had been broken in 1967 as they finished bottom of the table, but the league was expanded by one place and so Zenit survived to fight another day, the rationale being that since the Revolution had taken place in the City, it would be unfair to relegate the team on their 50th anniversary. Their league form continued to drift in mid-table for several seasons until reaching an all time high of third in 1980, and although they dropped into the lower reaches of the league for one season, there was a continual improvement in placings in the following seasons until in 1984 they were crowned Champions for the first time. They almost added the Cup to this as well, but lost the final to Dynamo Moskva after extra time.

Almost as quickly their form disappeared again however, and after another couple of seasons in mid-table the club was relegated for the first time in 1989, having finished bottom of the table. Things almost got immediately worse as they fell to 18th in the 20 team second division, but the bottom team were cut well adrift and so Zenit were never really under threat of a second consecutive relegation.

When the Soviet Union was dissolved, Zenit found themselves back in the top flight but were relegated after only one season, spending the next three seasons in the second league. They seemed to have missed out on promotion in 1995 when they finished third, but were fortunate that the Russian Federation decided to increase the size of the league and so they won their way back to the top flight, where they have remained ever since.

Their first real push for the title came in 2003 when they finished just three points behind champions CSKA. They maintained their position in the upper reaches for a couple of seasons before finally making the breakthrough in 2007, finishing a couple of points clear of Spartak, a feat they repeated in 2010 to win their third title. In the meantime they had managed to add a couple of Russian Cups to their trophy cabinet, once in 1988-89 and again in 2009-10.

Much of this recent success has come on the back of Gazprom, the state oil company, who bought a majority interest in the club in December 2005, and this has allowed them to compete for transfers on a scale never before experienced in Russia or the Soviet Union before it. $100 million was spent on new players and a new stadium was built for the club, putting them at the forefront of not only Russian football but European football as the club began for the first time to make real inroads into European competition.

Show Me Something I Can't See

Symposium #8 - Is Our Squad Overrated?