Liverpool head to Eastlands to face the reigning champions Manchester City on Sunday – 4pm kick off UK time –  boosted by an encouraging 2-2 draw with Arsenal on Wednesday evening, and a new addition to the squad in the shape of promising young Brazilian Phillipe Coutinho. 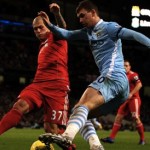 The corresponding fixture last season ended with a second consecutive 0-3 defeat at Eastlands and the Reds have won just one of their last six league visits to the City of Manchester Stadium, failing to score in five of those matches.

City’s only home defeat of the campaign came against Manchester Utd in December where they suffered a 2-3 reverse, ending a two year unbeaten spell at home in the league. The only other teams to have taken points from Manchester City at home this season were Arsenal and Everton, with both sides leaving COMS with a 1-1 draw. To emphasise the daunting task that lies ahead for us, Manchester City have won 36 of their last 41 home matches in the Premier League, drawing four and suffering just the one defeat.

Premier League record since the two clubs met at the end of August:

Martin Kelly (knee) is ruled out for Liverpool.

Manchester City are missing Vincent Kompany (calf), Micah Richards (knee) and Maicon (knee) through injury, while Yaya and Kolo Toure are at the Africa Cup of Nations representing the Ivory Coast.

Symposium #6 - How Many Points Is Acceptable?

The Myth of Rodgers' Inflexibility