One tough away fixture down, two to go but before we travel to Arsenal and Manchester City in the coming weeks, we have a home fixture against 12th place Norwich City on Saturday, 3pm kick off UK time. Three points are a must having lost at Old Trafford last Sunday and with the return of Fabio Borini from injury and Daniel Sturridge already taking some of the goal scoring burden off Luis Suarez, the Reds appear to be spoilt for choice in attack; a luxury we have been sorely lacking all season. 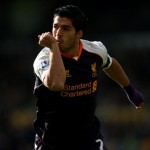 The corresponding fixture last season ended 1-1 while the Reds secured a 5-2 victory at Carrow Road with Luis Suarez bagging a hat-trick, with the now departed Nuri Sahin and an own goal from Leon Barnett adding to Suarez’s treble.

Since the two sides met earlier in the season Liverpool have picked up 26 points from a possible 45 while Norwich have accrued 22 points from 45.

Premier League record since the two clubs met at the end of September:

The referee for Saturday’s encounter is Michael Oliver, who has refereed just one of our Premier League games so far this season: the 1-0 victory over Southampton at Anfield back on December 1st.

Match day officials for this fixture:

Martin Kelly (knee) and Jose Enrique (hamstring) are absent for the Reds.