Liverpool begin a sequence of tough away fixtures in the league with the small matter of a trip to Old Trafford to face the league leaders and current form team of the division, Manchester Utd, on Sunday (1.30pm kick off UK time). 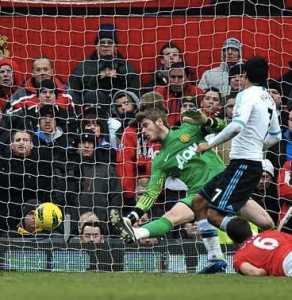 The Reds suffered a 1-2 defeat earlier in the season at Anfield despite Steven Gerrard giving us the lead just after half-time. Rafael equalised on 51’ then a late and controversial Robin van Persie penalty secured all three points for the Red Devils. We lost the corresponding fixture last season by the same scoreline courtesy of a brace by Wayne Rooney, with Luis Suarez pulling one back on 80 minutes to no avail. We’ve lost our last three league visits to Old Trafford, with the 4-1 victory over Manchester Utd in 2009 our only win from our last eight trips there in the Premier League.

This match has the potential to be a high scoring affair, with both sides not known for their stingy defences – Liverpool have eight clean sheets this season (three in our last four games) and conceded 26 goals in 21 games, compared to Manchester Utd’s five clean sheets and 28 goals conceded – while nine of the Red Devils’ opponents have scored two goals or more against them, compared to ten of our opponents scoring two goals or more against us this season.

In our last six league games either we or our opposition have scored three goals in each match. We fired three against Sunderland, QPR and West Ham and scored four against Fulham, while in between conceding three against Stoke and Aston Villa. Manchester Utd have scored three goals or more in 13 of their 21 league games this season and in Robin van Persie boast the league’s top scorer with 16 goals from 21 appearances (three as a substitute), while the Dutchman has also been credited with six assists. Liverpool of course have Luis Suarez in fine form, having scored 15 times in 20 Premier League appearances, as well as having three assists to his name.

Jose Enrique (hamstring), Martin Kelly (knee) and Fabio Borini (foot) are all ruled out for Liverpool.

TTT Symposium #3 - The Next Three Big Away Games