Okay, that’s not the whole picture. Overall, the ‘product’ of top level football is far better than in my youth, although the fact that it’s now referred to as the ‘product’ is one of the reasons to be rendered slightly queasy.

The pitches are infinitely better, and that, along with the influence of foreign coaches and players, has led to improved technical proficiency and more accurate, grass-based football (look away, Messrs Allardyce and Pulis). The stadia are less decrepit, and as a result, tens of people no longer lose their life in some unspeakable tragedy every couple of years. Instead of just the best of British (and a few jobbing Scandis), many of the the best of the world’s players now inhabit our league, and unlike the ’80s, the homegrown elite (which back then was Brady [who moved to England aged 15], Rush, Hoddle, Souness, Waddle, Francis, Wilkins and, er, Blissett) don’t move overseas. (This may also speak of the insularity of Brits, and also about how few major leagues value their skills; although I’m not sure what it says when Joey Barton is our major export.)

And there’s generally less violence on and off the pitch.

But there’s somehow less soul. And in place of outward violence there’s a kind of verbal nastiness, with words used to damage at the match, and also online. There’s less patience, more hysteria. Tabloid reporting of football issues (and indeed, every other issue) has sunk past the gutter and into the sewers. Everything costs ten times more than it used to. Quite often, it doesn’t necessarily feel like fun anymore, but some kind of constant war of attrition.

(And that’s another thing that sucks.) 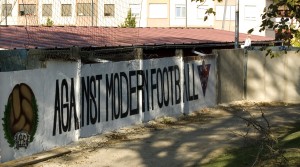 Tactics for Beginners - No. 6