The biggest news for Liverpool was that Lucas made his return from the start. Everyone else was as expected with the exception of Shelvey starting in the front trio. He spent the first half predominantly off the left before swapping with Sterling every ten minutes in the second half. Liverpool continued with the 4-1-2-3 formation they have used for the last couple of weeks.

Adkins kept his Southampton XI unchanged for a fifth consecutive game in what was a defensive-minded variant of his usual 4-2-3-1 shape (more of a 4-4-1-1). 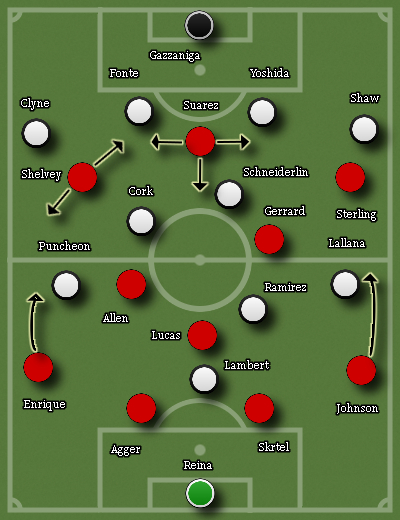 The match, especially the first half, was all about Liverpool and their overall dominance. Because of this, there wasn’t a pure tactical battle in the truest sense of the word. This analysis will outline some of the patterns (good and bad) shown by Liverpool during the match.