Welcome to the new style TTT match preview. With Gary’s usual match set-up, Daniel’s new stats section and Mihail’s tactical appraisal of what we might expect, it all adds up to the best match preview around!

Liverpool will be hoping to improve upon a poor home record – just seven victories have been picked up in our last 25 league games – with the visit of Roberto Martinez’s Wigan Athletic to Anfield on Saturday afternoon (3pm kick off UK time). The 1-1 draw with Chelsea last Sunday was our 6th stalemate in 11 league games this season and our 200th in the Premier League since its formation. 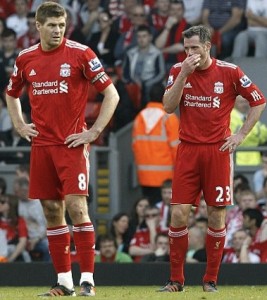 With Liverpool having won two of the 11 Premier League games played so far this season, the Reds will be hoping to claim maximum points against Martinez’s side but our record against the Spaniard is surprisingly poor, with just one win from six encounters against his Wigan team – and two wins from our last nine encounters with the Latics dating back to January 2008.

The corresponding fixture last season saw the Reds suffer a 1-2 defeat at Anfield with Luis Suarez scoring an equaliser after a penalty from Shaun Maloney had given Wigan the lead on the half hour mark. Gary Caldwell sealed the Latics’ first ever victory at Anfield with a 63rd minute strike.

Fabio Borini (foot), Lucas (thigh) and Martin Kelly (knee) are all ruled out for Liverpool while Pepe Reina (hamstring) is a doubt.