Liverpool’s 1-3 defeat to Swansea City in the Capital One Cup on Wednesday night has left the Reds with just the Europa League as a distraction from league matters until January. Last Sunday’s 2-2 draw with Everton at Goodison Park has left Brendan Rodgers’ side sitting in 12th place with a negative goal difference after nine games. Next up in the league is Alan Pardew’s Newcastle United at Anfield on Sunday (4pm kick off UK time). 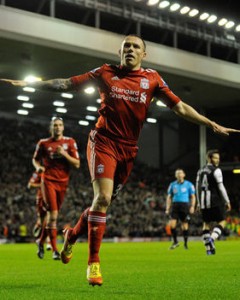 Liverpool have yet to lose to a team managed by Alan Pardew at Anfield and the Magpies’ record is pretty woeful at L4, with the Toon Army winning just 11 of the previous 76 visits to Anfield in the league. The Reds have won the last seven league games against the Geordies at home, scoring 19 times and conceding just twice. The corresponding fixture between the two sides last season ended with a 3-1 win for Liverpool courtesy of a brace from Craig Bellamy and a Steven Gerrard strike.

With Liverpool having won just two of the nine Premier League games played so far this season, the Reds will be hoping Newcastle’s dire record at Anfield continues.

Fabio Borini (foot), Lucas (thigh) and Martin Kelly (knee) are all ruled out for Liverpool while Glen Johnson (muscle spasm) is a doubt.

Entitlement, Expectation and The Modern Fan