Both managers went for familiar line-ups. For Liverpool Reina and Skrtel returned, and the other nine players were the same ones who played the final half hour against Chelsea last week. To further underline the similarities between this and last week’s match at Stamford Bridge, Rodgers chose the exact same formation – more of a 4-4-1-1 than pure 4-2-3-1, with Suso closer to Suarez and the wide players closer to the central midfielders than to the forward duo.

For Wigan, Martinez started with an unchanged team, using the same 3-4-3ish formation that he’s used since the second part of last season. 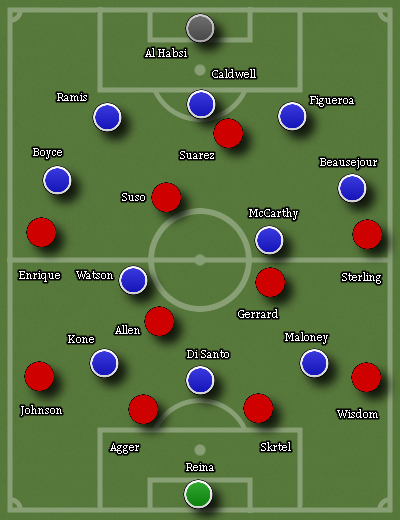 The match had three key periods with every one of them offering different tactical contexts, battles and winners.

As the match started it was obvious Wigan were set-up to defend deep and aim to form their 5-2-3 defensive shape as quickly as possible when Liverpool had the ball. Not surprising – as the game was at Anfield – and the onus, right from the start, was on Liverpool to provide the breakthrough.

Liverpool started the match slowly with ponderous intensity, not a very clear general structure and predictable patterns of play. In the first ten minutes the home team were obviously the more active but the actions were mainly down to individual flashes and runs rather than team moves and cohesive actions. The team looked rather passive when out of possession – there were sporadic attempts to press Wigan quickly but this was made individually, not in units or in a coordinated system with players understanding who, where and whom to press through the different zones.

Slowly, Wigan started to come out of their shell – probably feeling Liverpool were not going to throw everything at them in attack. After the initial reactive spell in the first ten minutes, the away team started to use the ball more. Wigan started to recycle patiently from deep (taking advantage of Liverpool being not willing – or able – to press them effectively), spreading out their players during the transitions to occupy the pitch well (hence creating the required passing angles to travel the ball higher up the pitch effectively) and started to look the more cohesive team.

As expected – and noted in the preview – Wigan used an interesting strategy to prevent Liverpool building-up from behind as per usual. The wide players were instructed to cut off the link between the centre-backs and the full backs (Kone on the right inside channel, Maloney on the left inside channel) which put increased onus on the central midfielders to both collect the ball and spread it out. The problem through the middle was that Allen and Gerrard played in the same line, hence largely duplicating each other’s roles. But the big problem was more structural. Strangely, Liverpool’s shape was more of a 4-4-1-1 with the wingers playing much deeper, playing as wide midfielders than wide forwards (to make the formation more of a 4-2-3-1). With Suso higher up the pitch, he was effectively more of a second forward than a pure third midfielder. (It wasn’t a surprise that the team’s better chances all came to him – one great shot from just outside the box and one headed chance following a cross from the left by Johnson). All of this meant the midfield battle was 2-v-2, which suited Wigan as Liverpool were suffocated for their usual build-up from behind and that their duo (Allen and Gerrard) didn’t offer diversity. McCarthy and Watson were able to occupy them, making Liverpool’s passing flow sloppy and lacking potency, while Suso was left for the defenders to take care of – Wigan had a 3-v-2 advantage at the back.