Brendan Rodgers takes charge of his first Merseyside derby on Sunday with the 187th league meeting between the two sides (1.30pm kick off UK time) at Goodison Park. The Reds claimed their first home victory in the league with the 1-0 win over Reading on Saturday thanks to Raheem Sterling’s first strike for the club, while Everton drew 1-1 with Q.P.R. at Loftus Road. 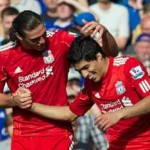 The corresponding fixture last season saw the Reds claim a 2-0 victory thanks to goals from Andy Carroll and Luis Suarez and Liverpool have won four of the last five meetings at Goodison Park. Of the 23 Merseyside derbies that have taken place since David Moyes took charge of the Toffees, the Reds have lost just four times with all four defeats coming at Goodison Park.

The Reds overcame Anzhi Makhachkala in the Europa League on Thursday night thanks to a Stewart Downing strike putting us top of Group A with three games played.

Fabio Borini (foot), Martin Kelly (knee) and Lucas (thigh) are all ruled out for Liverpool. Marouane Fellaini (knee) and Darron Gibson (thigh) are both rated as doubtful for Everton, while Steven Pienaar is suspended following the red card he received during Everton’s 1-1 draw with Queens Park Rangers on Sunday.

Tactics for Beginners - No.3