Liverpool lined-up largely as expected – the only change from the last two league matches was Jones replacing the injured Reina between the sticks. On the other side Reading also lined up as predicted. Probably the only real surprise was that Leigertwood was fit to start, given the doubts surrounding him before the match.

In terms of a basic framework, it was surprising how Reading lined up. They opted to start with only one striker within a sort of 4-5-1 shape (they did this only once up to now during the season, at home against Tottenham). Their midfield triangle was neither a proper 1-2 nor a true 2-1, but was flexible in its positioning in order to be able to cover for Liverpool’s midfield players. Liverpool started, as they have for the past couple of months, with 4-2-3-1 formation. 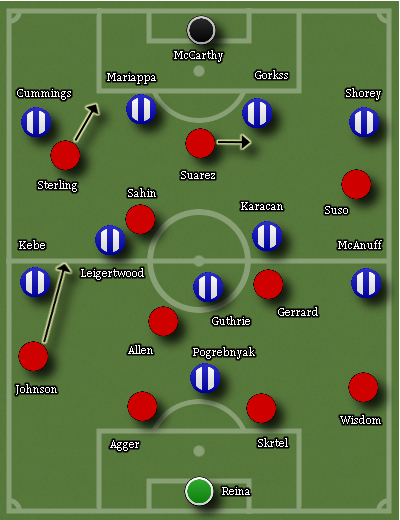 Reds on the Rise