As was widely reported, Rodgers opted for a very strong starting XI in this match. Liverpool made only three changes from the last league game. Assaidi and Downing replaced Sterling and Suso, while Shelvey came in for Allen, pushing Sahin into his more preferred deep-lying role.

For Anzhi, Hiddink had two crucial players unavailable – Diarra and Jucilei. G. Gabulov and Shatov (moved from the flank) played in their places which meant Carcela (right) and Smolov (right) were the wingers. Boussafa played just off Eto’o with Traore left on the bench as he was during Anzhi’s last domestic clash against Spartak Moscow.

Both managers didn’t surprise in terms of formations. Rodgers once again opted for his usual 4-2-3-1 with Shelvey playing ahead of Sahin and Gerrard, with the wide players, once again, being inverted. Hiddink opted for much more defensive minded shape, going for a type of 4-4-1-1.

For the third match running (following Stoke and Reading) Liverpool were found suffocated through the middle, as the opposition obviously placed huge focus on protecting this area. With Liverpool hugely lopsided – again – this didn’t help the team have a alternative route to escape this tactical predicament. 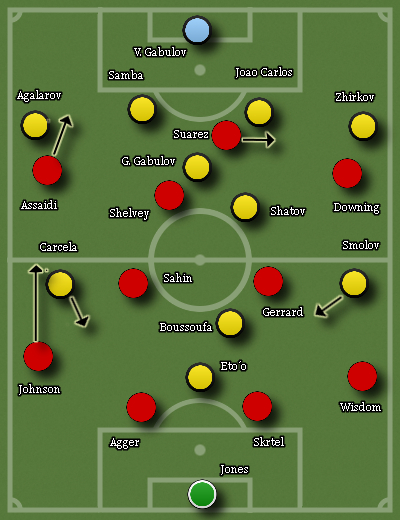