Both teams remained unchanged following their previous league games. This meant the match would present obvious tactical clashes all over pitch – both in terms of formations and personnel.

Liverpool opted to continue with their usual 4-2-3-1 formation. But with Sahin dropping deeper and Gerrard pushing forward so actively, it wasn’t a strict 2-1 midfield triangle. It was more of a cross between the two variants (2-1 or 1-2) depending on where the ball was  – in deeper areas it was more of a 2-1 with Gerrard deeper to help bring it higher up the pitch, and then 1-2 once he levelled with Sahin when entering Stoke’s half.

With Adam on the pitch, Stoke continued to play their usual – for the past month – 4-4-1-1 shape. This meant the teams were going to be perfectly matched up across the midfield in numerical terms – in defence Stoke’s 2-1 were going to match Liverpool’s attacking 1-2 triangle.

In a way the teams were well matched in terms of numbers all over the pitch – 3v3 in midfield, 2v2 down the flanks and the defences having a spare man against the opposition’s lone striker. With this in mind, the different strategies, patterns of plays and players’ roles were always going to be the major decisive tactical battles. 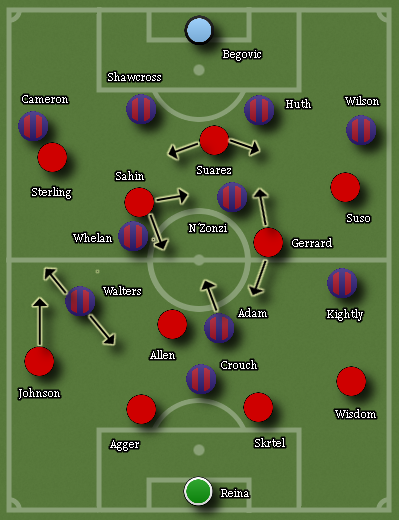 Tactics for Beginners - No.2