Liverpool and Manchester United lock horns for the first time this season at Anfield on Sunday (1.30pm kick off UK time) in what is Liverpool’s first home match since the findings of the Hillsborough Independent Panel were made public last week.

It promises to be an emotional occasion and both sides will pay tribute to the 96 men, women and children who lost their lives on April 15th 1989, with the captains of both clubs releasing 96 red balloons prior to kick off, while three sides of Anfield will form mosaics displaying the words ‘The Truth’, ‘Justice’ and ‘96’. 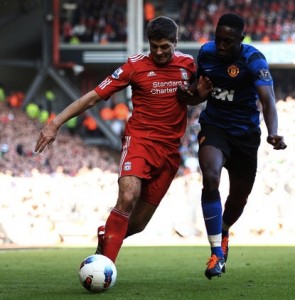 Both teams were in European action in mid-week, with Liverpool travelling to Switzerland to face Young Boys in the Europa League on Thursday evening while Manchester Utd defeated Galatasaray 1-0 at Old Trafford in their opening Champions League group stage match on Wednesday night. The Red Devils may have an advantage with an extra day’s rest and without the added difficulty of travelling to and from Europe but the Reds should take some comfort from our recent encounters with the Red Devils at Anfield. We’ve not lost a home match since 2007 that encompasses four league games (three wins, one draw) and an FA Cup 4th round match that we won 2-1.

Lucas (thigh) and Joe Cole (hamstring) are both ruled out for Liverpool.

Rodgers’ Liverpool and the Tactical Dilemma