An outstretched left boot, planted on halfway-line chalk: a perfectly executed block-tackle. A spin into space, and half of the Anfield pitch opens up; new-boy John Barnes is away, running at the defence of table-toppers QPR. The ease with which, having approached the edge of the box, he jinks to his left, past a lunging tackle, transforms a great skill into something effortless. But it is the way he drags the ball to his right, and somehow readjusts his balance, that defines one of the greatest goals the famous stadium has ever seen; it defies belief, not least because he somehow manages to accelerate in the process. England international Terry Fenwick is bypassed – a Tussauds waxwork in blue and white hoops. England international full-back Paul Parker slides in, but is not quick enough. England international goalkeeper David Seaman – beaten by a Barnes curler into the top corner earlier in the half – is left helpless again, as the Reds’ no.10, with right instep, nonchalantly slips the ball beneath the man in green.

This article is for Subscribers only. It is a chapter written for an upcoming book, “Best XI Liverpool”, out soon. Monitor the BestXI website for more details. 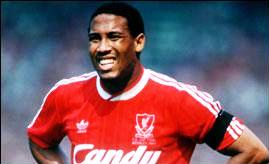 Why Daniel Agger Must Stay