This season, for me at least, will be remembered as one where Liverpool missed opportunities, learned valuable lessons and posed a number of questions that’ll need answering (ideally sooner rather than later), such as:

Given the spiralling negativity of recent weeks, I wanted to make a positive contribution. So I opted to tackle the one question that lends itself to objective analysis using publicly available data:

All of the data visualisations provided in this article are interactive. Feel free to click on them to highlight, filter and manipulate the results or view the underlying data (a larger screen is better, apologies to those using mobile devices or netbooks. Also, the visualisations aren’t supported by the IE6 browser). 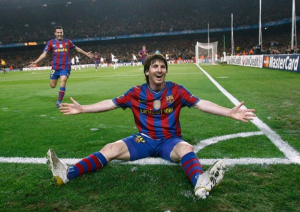 (The best goalscorer in the world. Picture is to highlight that, not to suggest he’s Liverpool’s solution…)

Getting the basic data together

“It is a capital mistake to theorise before one has data. Insensibly one begins to twist facts to suit theories, instead of theories to suit facts.” Sir Arthur Conan Doyle, The Adventures of Sherlock Holmes

I decided the most logical place to start would be to understand the best-performing goal-scorers in Europe at the moment.