Our unbeaten home record may have ended following our defeat to Arsenal on Saturday but there’s still plenty to aim for over the remainder of the season, even if Champions League football looks beyond us at this point.

Arsenal’s 2-1 victory at Anfield means we now sit ten points behind the Gunners in 4th place – although we do still have a game in hand – and with 12 league games remaining the odds are stacked heavily against us securing a place amongst Europe’s elite.

With one trophy already added to our collection, and an FA Cup quarter-final at Anfield against Stoke City still to come,  there are obvious positives to take away from the season (at least in terms of lifting trophies), even if we do end up without Champions League football on our horizon.

A lot will depend on how we perform over the remainder of the season. If we continue to struggle in the league and fail to improve on last season’s 6th place finish (and points total), then some may argue that we have failed to progress since last season. On the other hand, we’ve ended our six year trophy drought and have a chance of adding the FA Cup to our Carling Cup triumph, and if we do manage to achieve a domestic cup double then surely winning trophies is a sign of progression? 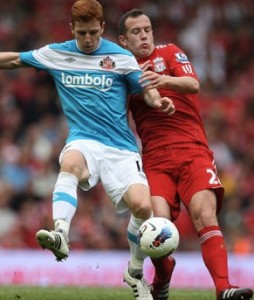 Next up for the Reds is a trip to Sunderland to face Jordan Henderson’s former club. He and Andy Carroll should need no extra motivation to be up for this fixture for obvious reasons, and with Sunderland missing their captain (Cattermole) and top scorer (Sessegnon) through suspension, it may be a good time to face Martin O’Neill’s revitalised side.

The sides drew 1-1 at Anfield on the opening day of the season, with Sebastian Larsson cancelling out Luis Suarez’s opener. In a sign of things to come over the rest of the season for Dalglish’s side, that game also featured a shot against the woodwork (from Downing), a missed penalty (by Suarez) and a dominant first half display that wasn’t accurately reflected in the final score.

Liverpool have an excellent record at Sunderland, having won seven of the ten Premier League encounters prior to this match and overall we’ve won 29 times on Sunderland’s home turf compared to 32 defeats.

Joe Parkinson scored our 1000th league goal against Sunderland during the 1908/09 season in a 3-0 victory for the Reds at Anfield.

News, Views and Media Reviews (No.2)