In a recent article I saw reference to Stewart Downing becoming the Reds’ 4th-most expensive transfer of all-time if all clauses were met. While I see nothing wrong with the reporting, it did strike me as unfair on the player, and those behind the decision to bring him to the club. When the British transfer record is £50m, is £20m really a fortune? 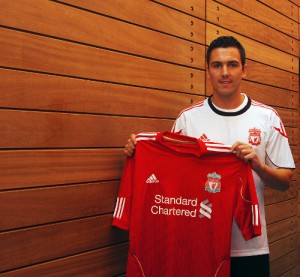 Part of the reason for our work on the Transfer Price Index (www.transferpriceindex.com) was to bring big buys from previous eras into line with current prices, using the ‘football inflation’ we calculated based on the Retail Price Index model, only using footballers (as the price of bread and milk does not rise at the same rate as players).

As such, I thought there’s no way Downing would come out as particularly expensive, and in truth, looking at the results, he ranks way back at 13th when inflation is taken into account; below the loathsome El Hadji Diouf.

What’s also interesting is the club’s record purchases under Houllier – Emile Heskey and Djibril Cissé – cost roughly the same as Andy Carroll in 2011 money, and not an awful lot more than Stan Collymore and Dean Saunders. So the current no.9 doesn’t have a lot to live up to in that company.

Thankfully Liverpool had some brilliant homegrown strikers from 1993 to 2004; alas, those bought to partner them often failed to live up to expectations. Between 1991 and 2011, of those purchased, Fernando Torres was the only striker who exceeded them (with Luis Suarez destined to join him).

The list below includes only those players who started at least one Premier League game, therefore excluding the inexpensive youngsters bought for the reserves or youth set-ups.

It’s also worth bearing in mind that in the time of Souness and Evans, Liverpool broke the British transfer record for players who rank only 5th and 7th here, and yet Houllier and Benítez never got within 20% of it. (Dalglish, as he had in the ‘80s, broke the record for a Geordie striker, but almost immediately Chelsea smashed it by some £15m when taking Torres; a figure I’d be surprised if the Reds get close to in the next few years. Indeed, Liverpool could only break the record in the knowledge that they were going to receive that £50m.)

So in a relative sense, deals from the early to mid-‘90s are perhaps slightly under-inflated. Downing cost roughly the same as Paul Stewart, but whereas Stewart cost 70% of the British record in 1992, Downing cost only 40% this summer.

In terms of sales, the top fees received are the £50m for Torres (as yet unaffected by inflation), and the £38.5m for Xabi Alonso.

(Note: depending on whether the average price of transfers rise or fall in the years following a transaction, some players’ values can appear lower than the original amount paid. This is quite rare, however, as most years the average price of a Premier League footballer rises.)