In light of Liverpool FC appointing Damien Comolli, Paul Grech of A Liverpool Thing looks at the role of the Director of Football. 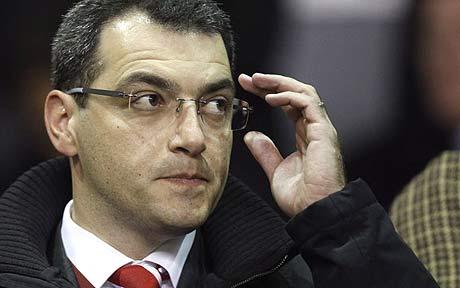 The road that led to the manager’s position as it is currently understood – the man who is in charge of practically everything – has been a difficult and tortuous one.

So domineering is the manager today that it is difficult to reconcile with the knowledge that it is a position that was born of the need to put a buffer between the team and those who owned it, one that was originally routinely carried out by the club secretary.

It is equally hard to accept that it was only in the early sixties that the England manager could actually choose the players who played in his teams. As much as the notion seems alien now, up till Alf Ramsey’s appointment in 1963 England managers had to defer to an FA committee that had the ultimate say on who played and who didn’t. Tactical issues often had less of a say then political ones, with each committee member angling for his own club’s players to play until a consensus was reached.

Even though the cult of the manager as the man who controls most aspects of his team had been established by Herbert Chapman’s success at Arsenal, and the resulting desire to emulate that success by copying what Chapman had done, it was only when the likes of Bill Shankly arrived at Anfield and started to claw away the power from the board room that the supposed power became a real one.

Across the continent, the role evolved in a different manner. The demarcation line between taking care of the team and running the club remained a very clear one. From the early days, coaches commanded great respect – not least because most of them came from Britain which, as the birthplace of the game, afforded them significant regard – but that was never seen as a reason to give them much of a say away from the football pitch. In Italy for instance, the word used to refer to the man managing the team is allenatore, which literally means ‘trainer’. Same goes for Spain with entranador. Even in language, their role was cemented on the training grounds.

In both of those countries, and practically everywhere else, it is the director of football who has always held most power. He is the one who decides who gets bought or sold, just as he is the one who maps out the strategy that should guide the club. Coaches come and go, strategies remain.

One of the finest examples of how this system works is at Lyon. The French side won seven consecutive league titles and did exceptionally well in the Champions League despite going through four managers (Jacques Santini, Paul Le Guen, Gérard Houllier and Alain Perrin).

Their success wasn’t down to being lucky in appointing four managers capable of picking up where the previous one left off. Decisions of which players are brought in isn’t taken by one man but rather a team of people (one of whom is the manager) with the director of football playing a key role.

More emphatically, the recent success of German football in developing players is founded in a shared ideology among directors of football who realised that, given the financial limitations of the Bundesliga, investing in young players was the only way they could compete.

Left on their own, managers tend to opt for experienced players who are more likely to help them get the points they need to survive. It is human nature for them to do so. It takes someone with an overall vision, someone who can understand both the long-term benefit and the short-term risks, to dream up and allow such a strategy to come to fruition.

Yet such examples seem to bear little weight for those arguing against the utility of a director of football in the English game. Such belief is generally shielded by two major arguments: that there has never been such a role in British football and that the success of the likes of Alex Ferguson proves that you don’t need a director of football to succeed but, rather, a very good manager.

The first of those two is fairly typical. Change is rarely welcomed, especially if it challenges conventional wisdom. It took the humiliations suffered at the hands of Austria and Hungary in the fifties to shatter the arrogant belief that no-one outside the British Isles was as good as the English were, to focus on what is perhaps the most glaring example of this. Yet those who, like coach Jimmy Hogan, had tried to warn of this were derided and shunned.

It would have been too hopeful to expect an easy acceptance of a role that, in the mind of many, undermines the historically established power of the manager regardless of the fact that in itself this is not a good enough reason to reject the utility of the role.

The second argument is perhaps harder to dismiss. Ferguson hasn’t had a director of football at United, yet they’ve done well enough. Neither did others like Matt Busby, Bill Shankly, Bob Paisley or Brian Clough.

Those names, however, span five decades, which more than anything highlights just how rare it is to find a manager who is capable of constantly delivering success.  Those managers were the exception, with the rule being the countless others who took similar roles and failed to deliver anything near the same level of results. Choosing the right manager, and getting some success, seems almost to be an act of chance.

It is equally legitimate to wonder what happens when they leave. The reply isn’t too comforting. Nottingham Forest went into meltdown once Clough resigned and haven’t recovered to this day. United imploded once Busby retired to the extent that they were even relegated. At Liverpool, the ethos of the bootroom – as well as the presence of Paisley giving his advice in the background – kept the success coming but eventually even that lost its power.

The point is that truly great managers, those who have a strong vision of what has to be done in every aspect of the club in order to achieve success, are a rarity. And it is virtually impossible to ensure that someone as good takes over once they leave. Therein lies the problem of relying on one man.

Liverpool over the past two decades provides the ideal test case. First there was Roy Evans, who built up a squad of players that achieved moderate success. Then came Gérard Houllier, who decided that the players he inherited weren’t good enough so set about replacing practically all of them. Rafa Benítez eventually took over from him and he too concluded that the players he had weren’t up to the task.

So over the years millions have been wasted on players purely because the power to do so was in the hands of the managers. Throw into the mix the differences between the academy and the first team for most of the past decade and you have a perfect mess on your hands.

There is no guarantee that it would have resulted in different outcomes, but it is hard to believe that Liverpool couldn’t have done better with someone to oversee that the players bought fitted in not only with the manager’s view of how the game should be played but also with the club’s philosophy.

Someone who could have avoided mistakes like Neil Ruddock, El-Hadji Diouf and Josemi. [PT: Clubs will still sign flops, it’s unavoidable. Comolli has a list of failures at Spurs; the vital thing is that he had a number of game-changing successes.]

Not to mention someone who could have helped preserve Liverpool’s pass-and-move trademark that seems to have been eroded along the way.

There will always be the need to identify someone who is exceptionally good in this role, as well as put agreed limits to what the role itself involves. It is equally crucial to have a manager that is comfortable working with that director of football and who shares the overall strategy.

Otherwise, and this is what has often happened in the past in England, it ends up being a clash of personalities. It is not an easy balance to reach especially as fans will typically push for the most popular manager rather than the one who is the best fit for the club and the way it is run.

But, then again, choosing a manager is a decision that is better taken by someone who knows the game and who has a feel of what the club believes in – the director of football – rather than people (the club directors) more used to hiring fund managers.

The key argument here isn’t that a director of football is a guarantee of success, but rather an element that could help achieve it and, just as importantly, sustain it over a long period of time. It may not be what, historically, was done in England but that does not mean that it isn’t a system that could work as well there as it has done elsewhere.

More on Damien Comolli’s record at Spurs can be found here.

Newcastle (A): Match Preview and Discussion