This is an extensive list of some of the achievements of Rafa Benítez and his players in the past five and a half years. Some of them won’t be remembered as highly significant, but many of them highlight the progress made since 2004.

Following the list, there is some statistical analysis on the manager’s performance, in comparison with previous Liverpool managers. 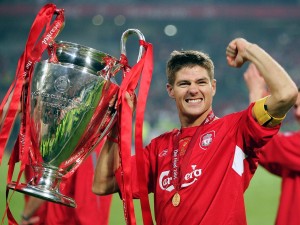 In his 1st home game in charge (Man City) Liverpool came from behind at half-time to win a game for the first time in more than 5 years.

At Fulham (October 2004) the Reds came from behind at half-time to win an away game for the 1st time in 13 years.

Became only the 3rd team, and the 1st British side, to win the European Super Cup 3 times.

Kept clean sheets in each of their opening 4 league games for the 1st time in the club’s history.

Sami Hyypia played in a 56th consecutive European game – breaking the club record for an outfield player (he extended that record to 57).

At Luton Liverpool scored 5 goals in an away F.A. Cup tie for the 1st time in 59 years.

Liverpool beat Manchester United for the 1st time in the F.A. Cup for 85 years.

Recorded their biggest ever away win in the F.A. Cup (7-0 at Birmingham) and the biggest by any team away from home in the Quarter-Finals for 106 years.

Conceded only 8 league goals at home – their 3rd best total ever.

Set a club record of 12 successive wins in all competitions (it was extended to 14 at the start of the following season).

By lifting the F.A. Cup became the 1st manager in the club’s history to win a trophy in each of his first 2 seasons in charge.

Set a club record of 21 goals scored by substitutes in a season – previous record was 12.

Achieved the 6th-highest accumulation of available league points in the club’s history, and at the time, the 2nd-highest ever number of wins (as a % of games played)

Recorded his 50th league win in just 93 games – a record bettered by only 2 Liverpool managers of the previous 57 years, Dalglish and Shankly.

Went unbeaten in 30 successive home league games for only the 4th time in their history.

Scored 4 goals in the 1st half of an away league game (at Wigan) for the 1st time in 15 years.

Pepe Reina kept more clean sheets in his first 50 league games (28) than any other goalkeeper in the club’s history.

Jamie Carragher played in a club record 58th game in the European Cup.

Jamie Carragher made a club record 90th appearance in all European competition.

Conceded only 7 league goals at home – best total for 28 years.

Only second English side to win in Nou Camp (previous one was Liverpool in 1976).

Beat Besiktas 8-0 to record the biggest ever Champions League victory.

Scored 4 goals in a game on 8 occasions before Christmas for only the 3rd time in club’s history.

Steven Gerrard became the 1st Liverpool player ever to score in 5 successive European games in the same season.

Fernando Torres became the 1st player in 12 years to score 20 league goals for the club.

Ryan Babel equalled the club record of most goals in a season scored by a substitute (7).

Liverpool had 6 players who scored 10 goals or more in a season. Only the 3rd time this had happened in the club’s history.

Fernando Torres scored 24 league goals – most by any Liverpool player in a debut season for 61 years.

Fernando Torres broke Ruud Van Nistelrooy’s record of most goals in a debut Premier league season by an overseas player.

Liverpool scored 119 goals in the season – more than any team in England.

Liverpool came from behind to defeat Manchester United in the league for the 1st time in 42 years.

Became only the 2nd English team to win in the Bernabeu.

At Anfield inflicted upon Real Madrid their biggest ever Champions League defeat.

Steven Gerrard became only the 2nd Liverpool player to play 100 times for the club in Europe.

Recorded their biggest win at Old Trafford for 72 years. It was also the 1st time 4 Liverpool players had scored at United in the same game.

Led the table for the 1st time ever in the Premiership with 2 games to play.

Recorded his 100th league win as manager in his 181st game. It was the 3rd quickest ever by a Liverpool manager and 50 games faster than Alex Ferguson.

Scored at least 3 goals in 6 successive games in all competitions for the 1st time in the club’s history.

Lost just twice in the league – equalling the fewest they had lost in a league campaign for 105 years.

Fernando Torres scored 33 goals in his first 50 league games for the club – the best by any Liverpool player for 52 years.

Won 75% of all available league points – 2nd highest in the club’s history.

Went unbeaten in 31 home league games – their 3rd longest ever run and best for 32 years.

Liverpool won a 3rd successive league game at Everton for only 3rd time in club’s history.

Yossi Benayoun scored a hat-trick against Burnley to become only the 5th player in the club’s history to score a hat-trick in 3 different competitions.

Fernando Torres broke the club record by scoring his 50th league goal for Liverpool in just his 72nd match.

In addition, here are some statistics relating to the eight Liverpool managers over the past 50 years.

Although it never appeared in the book, for Dynasty I compared the league records of all eight managers since 1959, with the first season’s points removed from their average tally. This first season total was removed because some managers inherited successful sides, and others inherited struggling sides; as such, I wanted a less-skewed figure for their performance.

Once Liverpool were struggling from 1991 onwards, the worst points tally posted by each of Evans (60), Houllier (54) and Benítez (58) was in their first season. By contrast, Joe Fagan, by inheriting a world-class team, had his best total in his inaugural season. The same applies to Graeme Souness (I’ve also excluded incomplete seasons if the manager left before the end).

So, when removing the first season – giving each man a season’s grace, if you will – the following figures are their average league points tallies; where a predecessor is listed in brackets it means they improved on the man before them. Currently Benítez has the greatest improvement by any Liverpool manager, but that will drop slightly if Liverpool do not reach 78 points in this campaign.

So anyone who says that the club has gone backwards since the days of Houllier (that includes you, Danny Murphy) is wrong; the facts suggest a big improvement.

(All tallies adjusted to 3 points for a win system, which was introduced in 1981.)

Following the publication of this piece, student Kais-Sabir Jesani emailed me some of his own analysis, which I feel to be first-rate.

“I feel that examining Liverpool’s points hauls in isolation, across seasons and managers fails to account for the performance of the team in relation to the highest-achieving team each season. As a result, I have analysed the points totals amassed by Liverpool in each season, as a percentage of the points achieved by the team that won the title in that particular season, for each season since 1991/1992.

“I felt this would provide some perspective as to how close the team came to winning the title or challenging for it, in comparison to the team that actually won it that season. This analysis would reflect the fact that in some seasons, the winning points haul would be higher or lower depending on the standard of other teams, competitiveness in the league etc.”

The average points total achieved by Benitez’ teams, as a percentage of the winning teams totals, during his 5 full seasons in charge, is 82.1%

If we exclude his first season (as you suggested – quite rightly, in order to avoid skewing), then Benitez’ figure rises to 87.36% – the highest amongst Liverpool managers in the Premier League era.

It is interesting to note that the performance under Evans was the most consistent during his four full seasons in charge, in that there was less deviation of the points achieved as a percentage of the winnings teams points for these seasons.

I’ll add some further interesting bits and pieces as and when I’m made aware of them. Some of these will be made available only to subscribers.