It’s been a tough old season, and one we will all want to forget as quickly as possible. But before wiping it from our minds, here is Part One of my take on how the individual players fared, From Agger to Johnson.

Daniel Agger 36 apps (none as sub)

If only he could stay fit.

In my view has the potential to be one of the world’s top five defenders, and but for a lack of real blistering pace, possibly the clear no.1. His defending is hugely underrated, and he’s now entering the start of a centre-back’s best years.

Agger was the Reds’ best left-back of the season, too; he didn’t really overlap at all, but drifted infield, into space (where he feels more comfortable) to good effect, and was rarely beaten by an opposing player. But centre-back is where his future clearly lies. 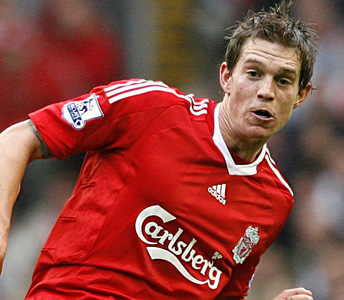 If only he could stay fit.

It’s fair to say that if he remains at Liverpool, the 26 games, including 13 starts, should help him bed in. By the final stretch of the season there were signs that he was dealing much better with the pace of the English game, but was still showing signs of fatigue after 60 minutes. A second season would see him under less pressure, but a healthy pre-season is vital.

While the £17m did not represent good value in 2009/10, there’s plenty of time, at the age of 25, for him to blossom; the extra burst of pace was evident from April onwards, but at times he can be too huried in his distribution.

His six league assists in 2010 put him up at the top of the pile in the Premiership for this calendar year, and his long-range shooting started to show with two well-taken goals, and some rasping drives that hit the woodwork. Most encouraging was that he seemed to be on Steven Gerrard’s wavelength, with lots of clever movements between the pair.

If only he could stay fit. (Getting a bit repetitive, this.)

"The Hyypiä Effect": Why Investment Is Necessary