By TTT member Andrew Beasley (with additional writing by Paul Tomkins, and with thanks to Graeme Riley for providing the match statistics).

I started the research for this article three weeks ago, but after the criticism of Benítez for his decision to substitute Fernando Torres with 25 minutes to go away at Birmingham, it seems more pertinent than ever to try and assess how much success Rafa has with his substitutions. 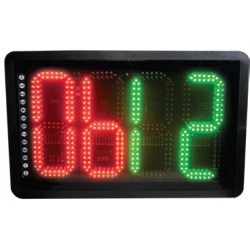 Assessing the impact or effectiveness of substitutions can be a difficult task. Some changes that occur are enforced through injuries, or as part of a reshuffle following a sending off. Others are used to give a player returning from injury some game time, or to let a star performer milk the applause of the crowd and get some rest once the game is won.

But most are used tactically to try and improve or protect the result, and I am going to look at how successful Benítez is in this respect, as well as at who Liverpool’s top performing sub is, and whether Andy Gray is right to criticise Benítez for not making substitutions before 65 minutes (and indeed if this is even the case).

So this is not a definitive or flawless study, but will hopefully shed some light.

It will probably come as little surprise to learn that Fernando Torres is Liverpool’s best-performing substitute. A record of four goals from 14 sub appearances in all competitions gives a rate of 3.50 games per goal. But if you break it down to minutes spent on the pitch, then Torres as a sub actually has a goal rate of one every 71.5 minutes. This makes you wonder how good Liverpool could be with Torres on the pitch and something approaching a Torres equivalent to come from the bench with stats like that.

The well-documented financial situation at the club makes this a virtual impossibility. To give this some context, the Manchester United bench in the recent game with Liverpool featured the £30.75m striker Dimitar Berbatov; had United been chasing the game late on, they could have brought him into play (alas, they were not). Liverpool’s entire bench of seven subs that day cost only £43m, but most of Liverpool’s squad money is tied up in the first team.

Players like Crouch, Bellamy, Sissoko, Keane, Arbeloa and one or two others were sold because they didn’t want to be on the bench, and because selling them raised funds to pay for better – but costlier – replacements for the first XI, such as Torres, Mascherano and Johnson.

And this is before even getting onto an übersquad like Man City’s, where two £25m strikers start in tandem, and £18m Santa Cruz warms the bench, while no-one bats an eyelid. Or at Chelsea, where their wealth allows a perennial sub like Kalou to sit on the sidelines pocketing £80,000 a week, along with Michael Ballack, on £121,000 a week, when Liverpool just can’t afford to offer a similar incentive to its own squad players.

(Whether or not Crouch, for example, would have stayed after a season as Torres’ back-up, the chance – or rather, the large finances – to tie him into a lucrative long-term deal in 2006 or 2007 would have prevented him nearing freedom of contract in 2008. Then it becomes a different scenario.) 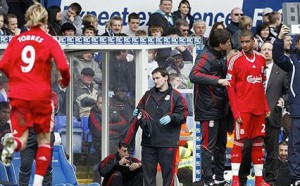 So with an uneven match-up like that, Rafa needs to make the most of his substitutions. My research suggests that he does. Using a simple system, applied to league games only, I can prove that Benítez does make effective use of his substitutions. (I have focused on league games only, as in two-legged cup ties, a draw – or even a defeat – in a match, whilst not the desired result, can be suitable to get through, making the impact of a substitution harder to analyse.)

When a substitute enters the field, there are three potential impacts upon the result: it can improve, stay the same or get worse. Below is a table showing how Benitez has fared: 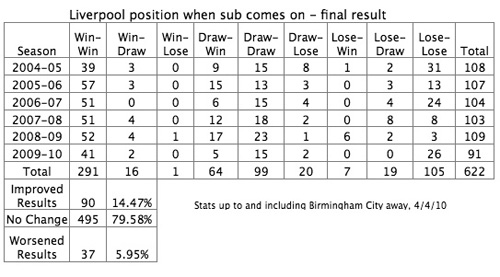 Put simply, when Benítez brings on a sub, the result improves 14.47% of the time and gets worse only 5.95% of the time – nearly 2.5 times more gains than losses.  The vast majority of games (79.58%) fall into the no-change category – the recent Birmingham away game being an example. Benitez made a controversial substitution, and whilst Liverpool didn’t win the game, neither did they lose.  In that instance, the gamble didn’t pay off, but these figures show that the gambles pay off more than they backfire.

In six years, only once have all 3 points been lost following a substitution, and that was away at Tottenham last year, a game in which Liverpool had the chances to win comfortably and lost only to a last-minute goal. Whilst it is concerning that 80.15% of substitutions in losing games don’t result in any points being gained (and an alarming 100% for this season), the fact that Liverpool drop points from winning positions following substitutions only 5.52% of the time shows how difficult it is for teams to turn games around once that vital first goal has gone in and a lead has been established.

Whilst this method of analysis is simplistic, and doesn’t take into account whether or not the team’s performance gets better without the result improving after a substitution (as is widely agreed occurred at Birmingham), it is at least factually accurate and is based upon results, the ultimate measure of success in football.

I do not have the time to carry out this amount of research into other top teams to see how they make their changes and how it affects results [feel free to let us know if you do, PT], so I don’t know if Benítez fares better or worse than other managers. But I’m certainly prepared to put my faith in someone with these statistics behind them.

Therefore, if Benítez is having this kind of success, does it really matter what time in the match he makes his substitutions? According to some people it does, and he should be making substitutions before the 65-minute mark when Liverpool are struggling. But is the 65-minute figure accurate?

It appears it is. I have compiled figures discounting first-half substitutions, as these would be for injuries rather than tactical changes.

Across all competitions, Benítez averages a first sub time (second half only) of 64.32 minutes. The pundits are broadly correct on this issue then. But are they right to criticise Benítez for it?

I have looked at the average first sub times for the opposition against Liverpool in league matches to see how Benítez compares to other managers. 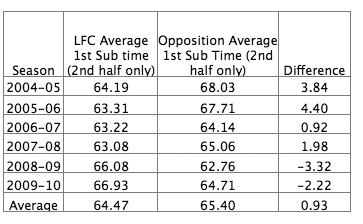 Surprise, surprise: Benítez is criticised for something which other managers largely appear to also do. The season where Liverpool’s first tactical substitution was on average the latest after the opposition’s (2008/09) was the most successful league season the club has had in years. More relevant to this study, it was the year with the highest number of substitutions that turned losses to wins: six. The other five seasons combined have a total of one. In other words, leaving substitutions until precisely two thirds of the way through a game seemed to work well last year.

Also, with Liverpool, on average, winning/leading a lot more games than they lose/trail in, you’d expect the opposition manager has a need to change the game earlier than Benítez. However, they do not.

So once again, these figures appear to vindicate Rafa’s decisions and methods. But perhaps people get swayed by those ultra-bold souls who make all three changes at half-time; ignoring that one single injury would be the same as having a man sent off.

It would take an absolute age to analyse the same information for all teams, but Rafa’s strategies do appear sound, successful and not dissimilar in principle to those of other managers. It will probably be too much to ask for anyone who is paid to analyse football to pay any attention to this, however.

The following, which looks at specific substitutions and individuals, is for subscribers only.

Idiot of the Day - überstupid