The idea of The Tomkins Times is to allow me an independent platform to give my thoughts, no matter how short or long. I am under no pressure to meet any external, editorial or commercial pressures.

The only commercial requirement is that enough people sign up, and that the site retains sufficient members. And I will do so with integrity, not by sensationalistic nonsense or tricking people into paying. At present, more than enough people have felt the site worthy of a few quid a month.

The site is designed to be an antidote to the majority of football debate in this country, where facts are irrelevant, debate is moronic and most journalists appear to do as much research as a high school drop out ahead of exams he won’t even be sitting. There are always exceptions; and those exceptions are welcome here.

I don’t claim to always be right, but at least I try and examine facts and context, and the same applies to those who contribute comments to The Tomkins Times.

Comment and debate sections exist on the site for subscribers only. Any member is free to post (though it’s obviously not compulsory), but the kind of comments you’d expect from the worst of 606 and similar forums are not welcome.

With this in mind, there is a zero tolerance approach to idiots. Post mindless rubbish, and you will be waved goodbye.

It doesn’t matter if you agree or disagree with my comments, or those of other posters, but you must show some reasoning behind your words, and some understanding of the context.

This then allows intelligent debate to prosper between discerning Liverpool fans, and anyone else can go foul up some public forum with illogical, hateful nonsense, if that’s their agenda.

As a result of this policy, some excellent and enlightening debate has flourished since the site’s launch, with an exchange of ideas that has benefited everyone, myself included.

My principles include thorough research, examining rather than regurgitating myths and received wisdom, and judging managers in the context of present day realities, not glories of the past.

As an example of what I object to, there was Jon Champion’s almost hateful commentary during the 2-2 draw with Birmingham, in which he went so far as to say that Gerrard was probably only on the bench to make Rafa look good to the fans; a quite ludicrous statement made without any proper knowledge of the medical situation.

At one point he said it could be the worst Liverpool start for more than 40 years, and that Liverpool fans like their history. He then said that Liverpool have never been further from winning the Premiership – a quite ludicrous comment to make in November, given past finishes some 40-odd points behind the leaders, and that this season still has plenty of time to see a gap closed, even if winning it is a long shot. Under Souness, Liverpool were close to facing relegation at one point at a much later stage of the season (1992/93), before Ian Rush inspired the Reds to a fine run-in and eventual very distant 6th placed finish. Where’s the history there, Jon?

Benítez was described throughout as “the lucky general”, and I wonder what kind of basis such statements have in reality?

I can’t recall any other highly decorated manager ever being spoken of so disrespectfully, and if anyone thinks there was luck in winning in Istanbul in 2005, or Cardiff in 2006, they should check the quality of opposition beaten along the way, as well as the decisions that went against the Reds (why Cech wasn’t sent off and a penalty given for the “ghost goal”, being one); and not conveniently forget that Liverpool, in a reverse of two years earlier, outplayed Milan in 2007, and that time were unlucky to lose, largely courtesy of Pirlo’s deflected goal.

Was Benítez lucky last season when United got the penalty against Spurs that effectively ended the Reds’ title hopes? Or when Torres missed half of the league games? Of course all managers have their lucky moments, but the chaos behind the scenes at Liverpool these past few years is hardly a great blessing, is it? If that’s being lucky, then we’re all doomed.

And what did luck have to do with Valencia winning two titles in three years, having not even won one since 1971? Manchester United had luck in 1999, but that didn’t mean Ferguson was a lucky manager. Like anyone else, he has had luck at the right time, but that’s behind all success.

Champion’s utter guff is the kind of rank stupidity I aim to hold up to scrutiny, and show for what it is. The members of this site, to date, are of a similar mind. 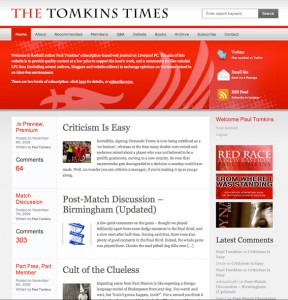